Have you ever tried to move an oversized couch into an undersized apartment? Walked away in frustration, leaving it wedged in a door frame, thinking perhaps it looks just fine in the hallway instead of the living room? Or purchased a house that conveniently comes with a pool table since the previous owners didn’t have the muscle or patience to move it out?

Now imagine moving a 12,000-pound MRI machine from one floor to another. Along with its 4,000 pounds of MEP equipment. And in addition to that, install a new MRI and remove two others. Weight and vulnerability are significant factors for these million dollar machines, but perhaps even more importantly, every day that an MRI isn’t connected to power, it burns off thousands of dollars of liquid helium—not something an Owner is anxious to waste.

Luckily, GLY teams like a good challenge and had the opportunity to tackle this exact problem. In order to make room for Overlake Medical Center’s [OMC] new Cancer Center, the Outpatient Imaging Department moved from its home on the second floor to the first.

It took OMC staff, GLY veterans who know the hospital like the back of their hands, equipment supplier Siemens, and rigging company Omega Morgan nearly a month of collaboration to develop a precise, fool-proof plan. After numerous meetings, discussing multiple what-if scenarios, and breaking the move down into multiple phases, game-day quickly approached … and the GLY team was ready.

On May 7 and 8, 2016, GLY, Siemens and Omega Morgan tackled the largest number of equipment moved in a weekend—as well as the most challenging from a logistics standpoint, according to Siemens. The goal, aside from moving machinery without damaging it, was intense: move FAST to save the helium.

Relocate: 1 MRI; 1 CT; 1 PET-CT; 3 Ultrasounds; 1 Dexa
Move Out: 2 MRIs
Move In: 1 MRI; 1 Xray; 1 Fluoroscopy
The six smaller pieces of equipment were moved over the course of several weeks [ultrasounds, Dexa and fluoroscopy]. Following this, the remaining six larger pieces of equipment [MRIs, CT and PET-CT] were moved in a single weekend, which is the focus of this story.

DID YOU KNOW? This is the most equipment Siemens moved/installed in a single weekend. Logistically, it was their most difficult move ever. Most moves involve relocating or moving just one or two pieces of equipment…not six!

GLY Project Engineers detailed each piece of equipment line by line, developing questions for Siemens along the way—such as what are the MRI rough-in directions? Where will the fire sprinkler come in? Each piece of equipment took 2-3 hours of examination. Once Siemens addressed each question and vetted any problem areas, the team started planning and prepping the physical move.

To keep the imaging unit up and running for as a long as possible, GLY shut down only a portion of the department—working behind temp partitions—allowing patients to be seen until two days before the big move. Behind these partitions, the team removed precast concrete walls and glass to make room for equipment to exit the building. The most important part of this breakdown/prep phase was giving hospital staff a clear picture of what to expect. The team provided work plans that clearly spelled out what was going to happen and when, and what the impacts to OMC operations were. Eliminating surprise for staff and patients makes their lives much easier.

DID YOU KNOW? GLY built Overlake’s original MOB 15 years prior and, anticipating the hospital’s future needs for such a moving event, placed two pieces of removable precast concrete and windows on the second floor.

The first MRI unit shut down on April 24 to allow the team access to the spot where equipment would travel outside the building during the move. On May 4, the second MRI, CT unit and PET-CT shut down.

On a [thankfully] dry, sunny weekend in May, Siemens, Omega Morgan and GLY moved equipment from point A on Level 2 to point B on Level 1. At this point, the show largely belonged to Siemens and Omega Morgan—the experts in specialty equipment installation—with GLY standing by to jump in and turn over the space as quickly as possible once equipment was in place.

One of the new MRI machines makes its way into the new imaging unit. [photo by Colby Williams of Fueled Media]

Equipment must sit in a precise location, determined weeks prior by physicist reports.

MRIs connect to a quench vent to release helium in an emergency.

GLY had four days to close out the new MRI rooms and get everything in working order, leaving no room for error. The most important task: button up the walls surrounding the two MRI machines—framing, sheet rocking, and installing radio-frequency [RF] doors and windows. Each MRI room must be completely enclosed in copper shielding to block RF waves from entering the room. If the doors are installed, the machines can’t turn on, and Siemens’ equipment calibration schedule is hindered. Why wasn’t this done ahead of time? The MRI equipment is so large that moving through a standard door frame is impossible. To address this, the team left out walls in the initial construction of the space and built them back around the equipment.

DID YOU KNOW? Lead shielded rooms must have specific interior geometry relative to the equipment’s isocenter—the point in space through which the central rays of radiation beams pass. Physicist reports help in designing the shielding, its thickness, and precise location in the actual room. Marks on the ground and ceiling aid in the correct placement of the equipment on move-in day.

Siemens calibrated each piece of equipment.

Thousands of pounds of steel sheets were installed at each MRI Room to control/contain the equipment’s magnetic field.

ETS-Lindgren tests for any radio-frequency leakage after installing the steel and copper shielding.

DID YOU KNOW? A quench vent is an essential component of the MRI room. If the liquid helium inside the MRI leaks into an exam room, it rapidly expands to gas and can displace the oxygen in the room [not good for patients and techs!] So, if the equipment malfunctions, the tech “quenchs” the machine by releasing all the helium gas into a vent pipe that is routed to the building exterior. Quench vent pipes are fully insulated stainless steel, and increase in size until the exterior discard point. The pipe sizes for this project range from 6–12 inches and travel through the RF copper shielding via waveguide, then penetrate through the level 2 slab, travel through a vertical shaft on the second floor, and exit through the existing exterior precast panel system.

GLY turns the new space over to OMC for testing.

The new imaging department opens to the public. GLY now begins renovating the old location, converting it to the new Cancer Center, set to open August 2017. 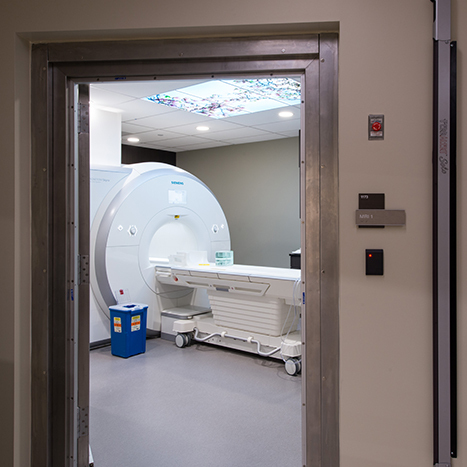 One of two completed MRI rooms.

The Case for Design-Build

Janine feels at home in the world of marketing since it combines her passion for art, writing and graphic design with her natural ability to organize, strategize, and analyze. While she enjoys her day-to-day responsibilities, facing new challenges, and the many opportunities to apply her creativity, her favorite part about her job isn’t even marketing-related; she loves working with people and getting to know everyone in the company top-down—from estimating to IT to the hundreds of hard-working craftspeople out in the field.